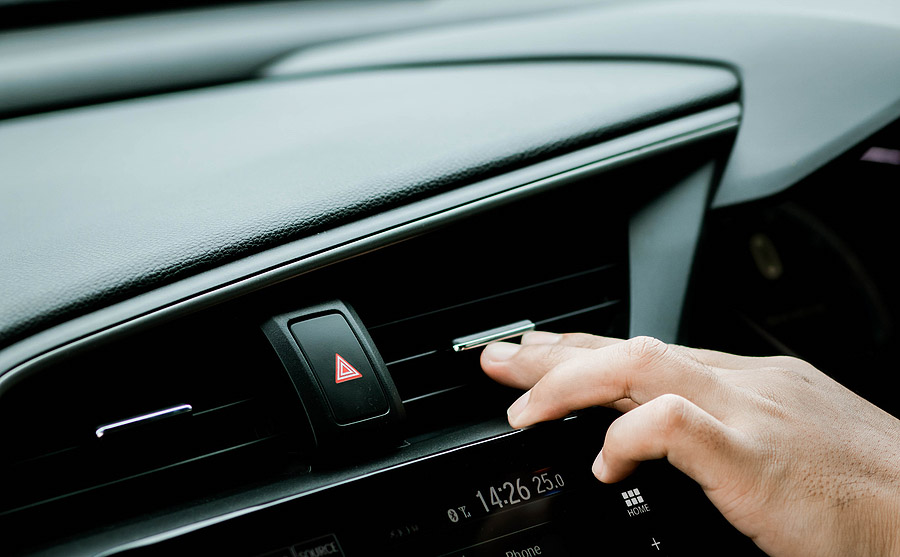 The heat wave has arrived, and the race to stay cool has begun. While your vehicle’s A/C breaking down or losing its effectiveness is not the end of the world, it is especially dangerous on those sweltering days where even open windows do not help. Drivers can easily suffer from heatstroke and become a danger to themselves and others. Not sure how to diagnose the problems? Our experts have listed the top five A/C issues to look out for this summer.

#1. The air only reaches a lukewarm or mildly cool temperature. First, you should try two potential fixes: replacing the cabin air filter and topping off the refrigerant. Air cannot move as sufficiently through a dirty filter, and refrigerant is key to cooling down the air. If those do not solve the problem, then you could be dealing with a leak in the hoses, compressor, condenser, or evaporator. Finding it will require help from an expert automotive technician.

#2. There’s less or no air coming out of the vents. Replacing a dirty cabin filter could be another solve on this one, but it’s most likely the result of a blower motor or blower motor resistor that has failed. Blower motors that have failed will prevent air from being moved through the air vents to reach the cabin. The blower motor resistor will also have a similar effect as it controls the amount of air that is moved through the vents (low, medium, high). Diagnosing the culprit will typically require an expert technician.

#3. There’s an unpleasant odor. An issue with bacteria growing in the system typically occurs in vehicles that do not use the A/C often or use the highest setting for long periods, which creates more moisture in the unit. It can also occur due to dust, dirt, and other contaminants collecting on the cabin air filter, which starts to smell. Try replacing the filter first; if that does not help, you’ll need to have an expert find the source and remediate it with an anti-bacterial solution.

#4. The A/C makes noises when turned on. A well-tuned A/C should be relatively quiet, so it’s easy to notice when it starts to make a new noise. The two most common causes are debris entering the system or a part has failed, which causes a rattling or grinding sound.

#5. There’s water on the floorboards. Condensation naturally occurs on the A/C’s evaporator coil, which is located under the dashboard for most vehicles. Over time, the drain line in the unit can become clogged by a film, the result of moving air and that condensation, which means the moisture can’t be properly removed. If that happens, drivers might notice water dripping on their floor, usually on the passenger’s side.

The expert mechanical technicians at Superior Service Center are prepared to diagnose and repair your A/C issues. We serve the Southern Twin Cities metro at our locations in Eagan, MN and Apple Valley, MN.